Missional church planting is gathering people together to become an extended family of God’s people.  It happens incarnationally, life-on-life, through interpersonal and compassionate connection. 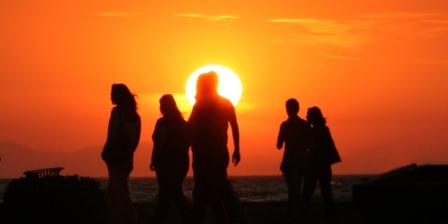 Last night Becky and I went to Roman’s Hair Salon to get our hair cut.  We were Roman and Lee’s last customers of the day.  Roman cuts Becky’s hair and Lee does mine.  As we were waiting, we heard Roman speak powerfully into the life of another customer whose daughter had recently come out of a deep coma.   Roman was encouraging her not to fear but to rely on the Lord for healing.  After the customer left, I kidded Roman that she is a counselor and should call her business “Roman’s Hair Salon and Counseling Service.”  She laughed and blushed!   It was evident that she was honored.

Lee was soon cutting my hair (basically cutting it all off and trimming my eyebrows as she does every two weeks!  The best kind of hair cut for an old man like me!).  Lee asked how often Becky and I exercised, and I then asked her about her exercise as well.  In our conversation I mentioned that there were two types of exercise, exercise of the “body” and exercise of the “heart.”  She paused and then asked what I meant by the “exercise of the heart.”  I described God forming our inmost being so that we think and behave like Him.  For the rest of the haircut she talked and talked about her understanding of this and how it was touching her heart.  Although speaking with a deep Vietnamese accent, I was able to hear most of what she was saying.  She wanted to know more about “heart exercise.”

In the meantime Roman was describing to Becky her role as a counselor.  “I love my customers,” she said.  “I believe God gives me a gift of hearing and advising them.  I am bold in my speech.”  Becky asked, “Who is your counselor?”  She paused, thought for a while, and finally said, “I guess God is.”  She also testified that a doctor helped her mother, a refugee from Ethiopia, with glaucoma surgery and only charged her $500, which her family was able to raise.   Becky reflected later that perhaps hair stylists are like proverbial bartenders:  When asked, “How are you doing?”, customers may likely respond, “I am having a terrible, horrible, very bad, no good day!”  People sit with aching hearts and words just come tumbling out.  The server listens and gives words of hope.

After our haircuts Becky and I congratulated Roman on new décor of her beauty salon.  With tears she began to tell us her journey over the past six months.   She almost lost the salon because of high rent and lack of customers.  She told how the owner, believing in her, reduced the rent; how an exceptional 25-year-old resource person through Groupon taught her how to advertise; and how a new friend had unexpectedly decided to redecorate her salon as a special favor to her.  “I know it was God,” she said, pointing up.  We were touched that these searchers with little Christian community were yet acknowledging God in their lives. 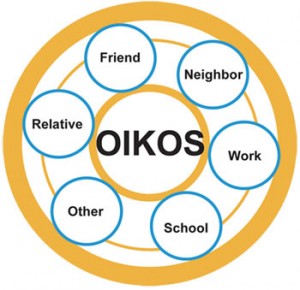 We began to talk about how lonesome North America is, how we live in proximity to many people but without neighborliness, and yet how we need each other to live and survive in this world.   As we shared, we asked both Roman and Lee to become part of our extended family, our “Oikos,” and begin a spiritual journey with us.  Becky and I gathered Roman and Lee in a small circle and prayed with and for them.

We are learning that people-gathering is done relationally, heart-to-heart, with prayer, calling people into community and allegiance to God.   We are on a journey . . . .  Pray for us.